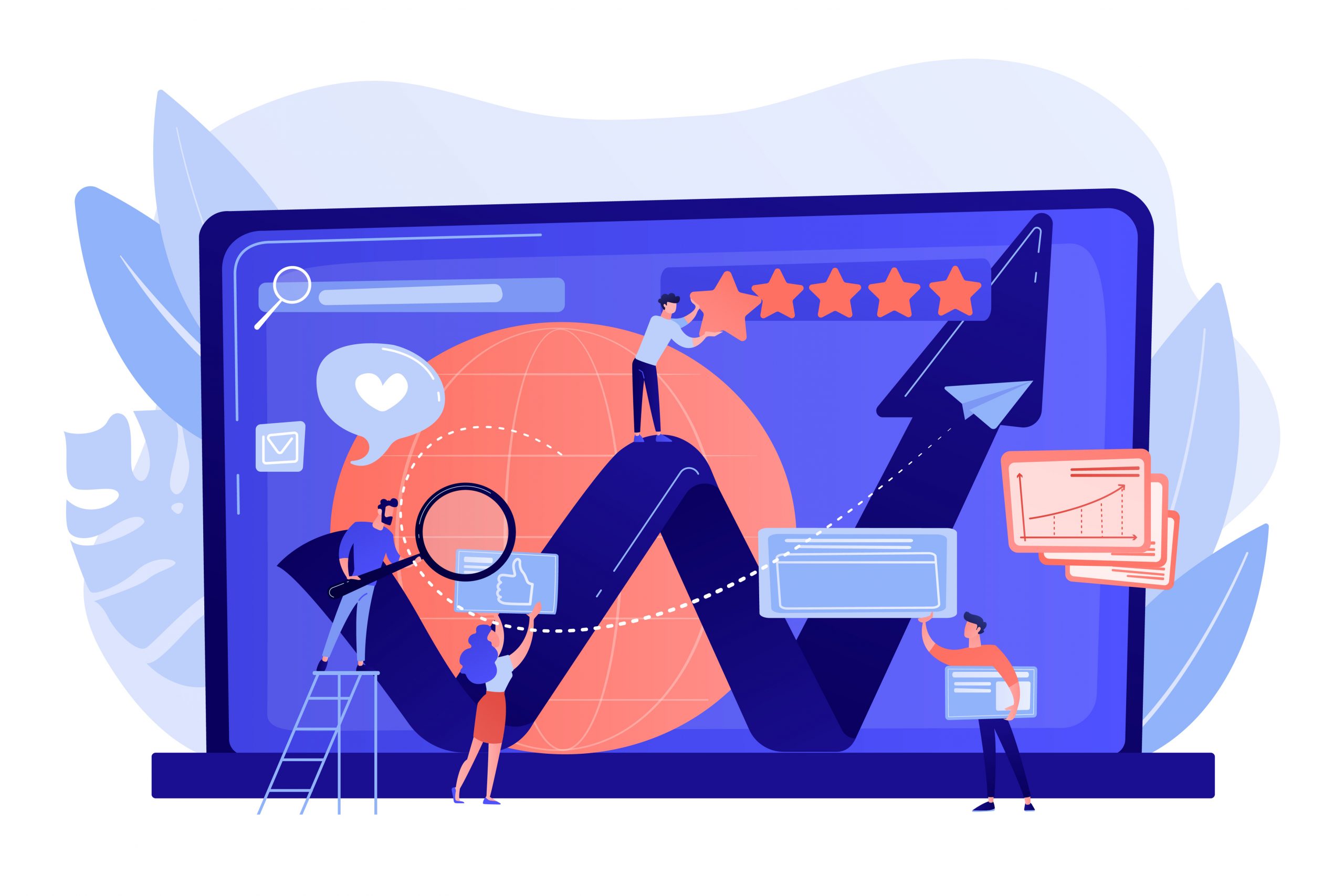 On a daily basis, we are surrounded by various rules to make our lives easier. For example, drivers must obey the highway code. Thanks to this, each driver knows how to behave on the road and what rules to follow. Therefore, driving a car is safer, drivers’ behaviour is predictable and everyone knows how to drive in such a way that others understand their intentions. For Python, there is a highway code equivalent named the Python Enhancement Proposal (PEP). This document contains rules to improve your Python code by making it more readable and consistent. Unluckily, even experienced programmers may have a problem recalling all of the rules written in the PEP. This is why Python linters were created.

Linters are programs that advise about code quality by displaying warnings and errors. They can detect your Python code mistakes, notice invalid code patterns and find elements that do not follow your conventions. Python linters have a number of advantages, such as:

Of course, every approach has its disadvantages:

There are many Python linters that you can leverage in your day-to-day work. The logical lint tells us about actual code errors and the statistical lint helps the programer spot formatting issues. I will present how to install and run the most popular linters like:

Moreover, you will find a comparison of each output. This could help you choose the linter that best fits your needs.

Let’s write some code that has several mistakes and doesn’t follow the PEP rules. Then we will check the Python code quality using different linters with the default configuration.

Below some problems with the example code are listed:

The Pylint is a static Python code analysis tool that finds programming and stylistic errors, bugs, invalid code constructs and inconsistencies with the coding standards. Moreover, Pylint can be customized to our needs by silencing some of the reported bugs, e.g. output messages can contain only information about errors for the most important programming issues.

To get Pylint you can use pip.

in your console where script.py is the name of the Python script with our bad code example.

The Pylint output message informs about 15 issues that should be resolved if we want to improve Python code quality. Let’s summarize them in the table below: 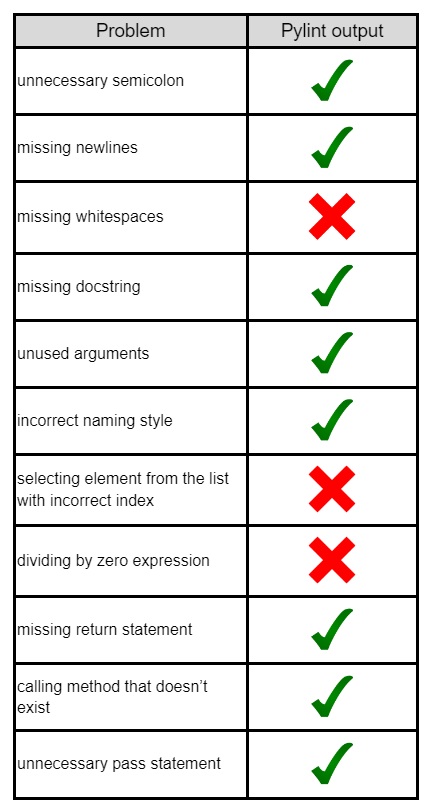 Pylint informed us about all of the errors that we had expected, apart from the errors related to selecting an element from a list with an incorrect index, the division by zero expression and missing whitespaces. Additionally, Pylint pointed out that after the if-else statement the code becomes unreachable, which means that it will never be executed. At the end of the Pylint message, we can see that Pylint rated the code at -13.00/10 (yes, minus thirteen!).

Another example of a Python linter is Flake8. It returns a report that contains information about incorrect style, syntax inconsistencies and complexity errors. There are many extra options that allow you to fit Flake8 to your needs.

Flake8 runs the three tools listed below by launching the single command flake8:

Flake8’s output consists of error types such as:

To install Flake8 you can use pip.

to see the results.

Flake8 reported 9 possible errors. Let’s summarize them in a table. 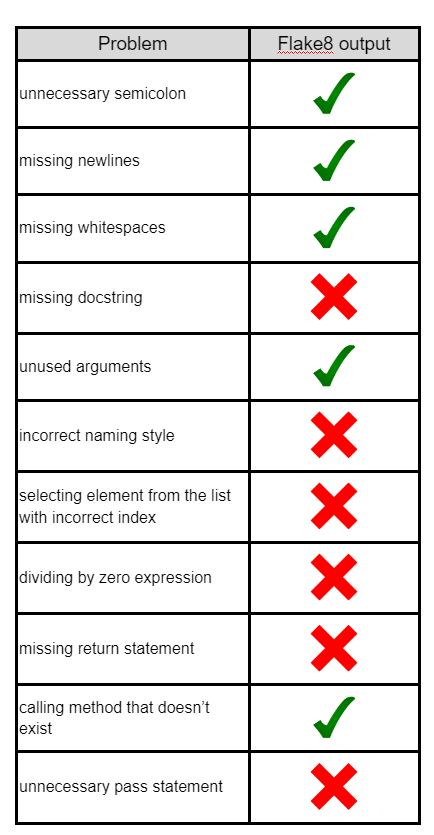 Flake8 identified the unnecessary semicolon, missing newlines and whitespaces, unused local argument (but it didn’t report the unused global argument), returning undefined value and the calling method that doesn’t exist. This output message is definitely less detailed than the Pylint one, but this exactly why some developers prefer Flake8. It reports only about the most important style, syntax, and complexity errors.

To install Pyflakes use pip:

Running this Python linter is very similar to Pylint and Flake8. Just write the program name and path to your code like in the example:

PyFlakes reported only 3 problems. Let’s summarize them in a table. 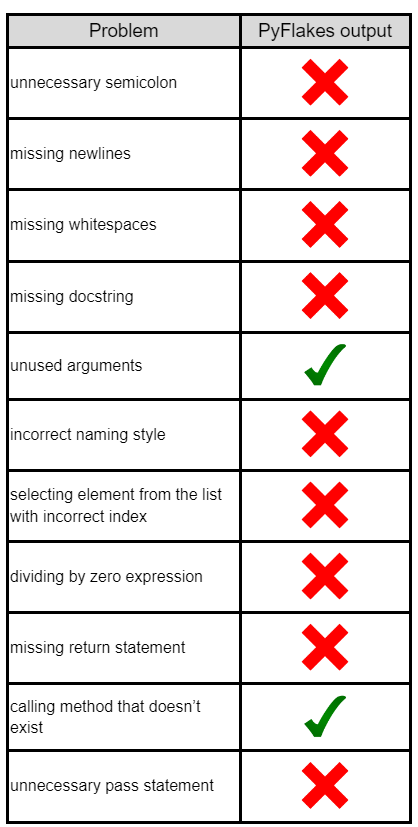 PyFlakes only complains about the non-existent calling method and unused argument. The output is clear and errors are not categorized into specific types.

Which is the best python linter for your project?

Objectively choosing the best programming tools is probably impossible. The thing is, some technologies and tools are right for one type of projects, while others are better for other types of projects. So, how do you select the proper linters for your project? The Python linters mentioned in this article are open-source and available for free; hence they have been tested by many professionals, and they are quite popular among developers around the world. If you want to improve your Python code with linters – and you really should leverage them in your work – first try those recommended in this article. 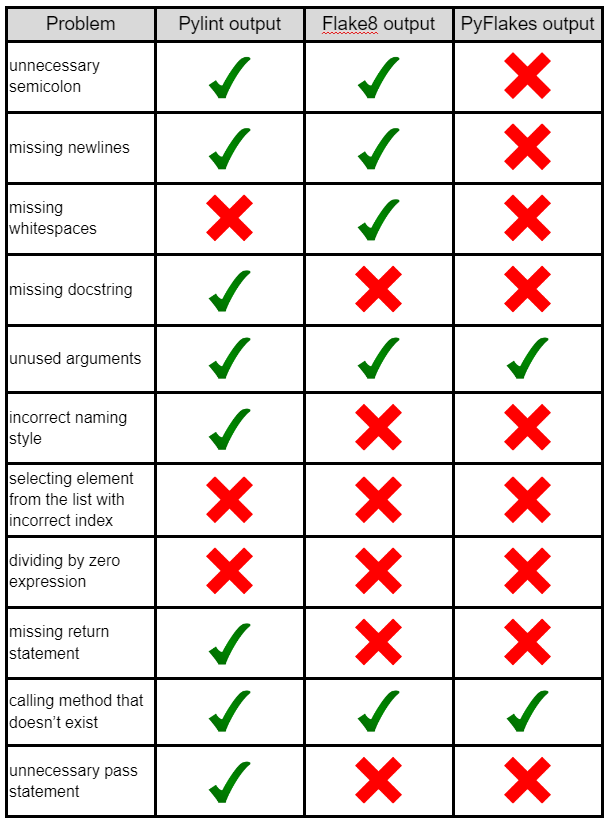 In this article, I have compared three linters: Pylint, Flake8, and PyFlakes. Each program was run without any additional settings. Pylint reported most of the bugs, including some that we hadn’t expected (unreachable code after the if-else statement). Flake8 reported fewer bugs than Pylint. It didn’t inform us about missing docstrings, incorrect naming styles and the unnecessary pass statement. However, only Flake8 reported missing whitespaces. PyFlakes returned the shortest list of errors. It reported only about the unused argument, undefined value and non-existent calling method. None of the tested linters warned us about selecting an element from the list with incorrect index or the division by zero expression. Even so, this is explainable because these are not stylistic, but rather, logical errors.

It is difficult to decide which of the linters tested in this article is the best. Please note that each of the tools can be customized with additional settings. However, I hope that the article has helped you choose the linter that best fits your needs. Contact us if you require assistance from experienced Python programmers for your project.