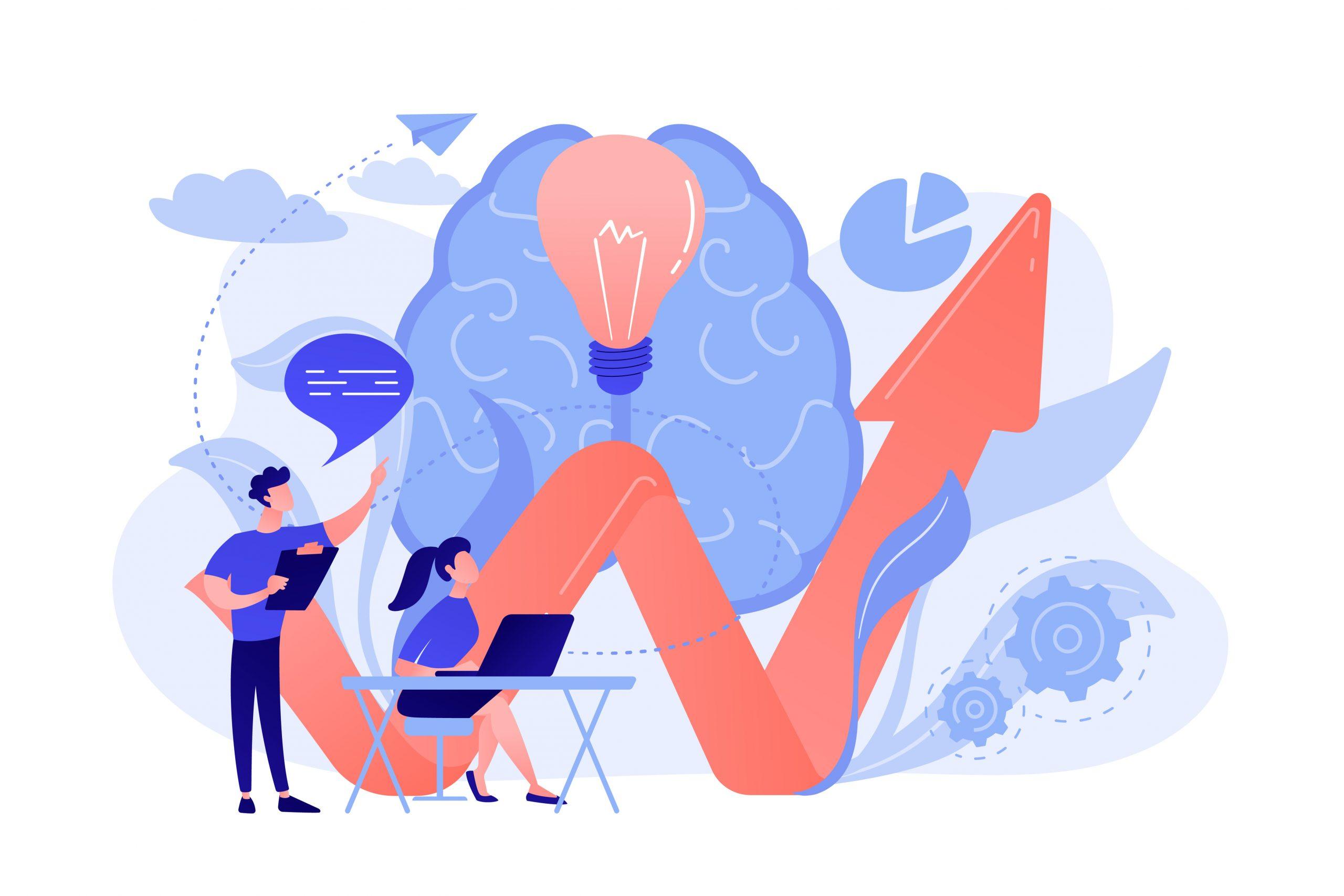 With the new Airflow version 2.0 many new features have been added to this powerful tool from Apache. One of the updates was the introduction of Smart Sensors, which can drastically improve the Airflow performance if you are using multiple sensors in your dags. In this article, we’ll compare regular and Smart sensors and show you how to configure your first Smart Sensor.

Sensor is one of the Airflow operator types whose purpose is to basically wait for something to happen. If your process is event-driven, which means that the workflow needs to be started only when some event occurs, you should use Apache Airflow sensors. Typical use cases of sensors: waiting for a file, delaying dag execution, checking if SQL entry has appeared, waiting for other dags to finish.

Example usage of Sensors is presented in the dag below: 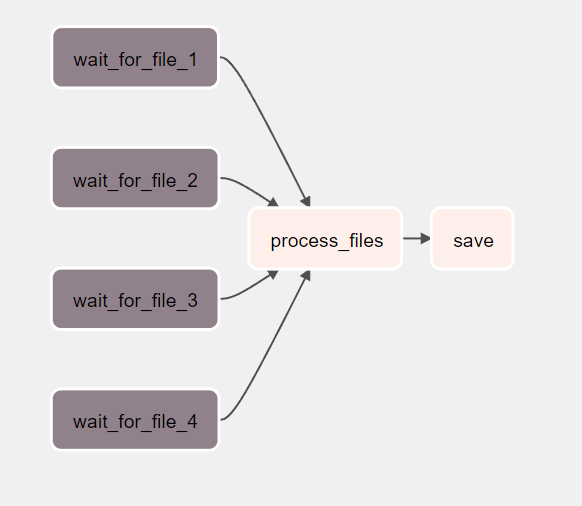 Here we are using FileSensor to create four tasks that are supposed to wait for creation of certain files. Each task wait_for_file_{id} constantly checks whether a file in the specified path has been created and succeeds when it finds the file. In default, the Airflow dag sensor checks if the file exists every 60 seconds, but this can be configured using poke_interval parameter when creating the sensor.

In the example DAG, process_files task gets triggered only after all the files specified in the sensors are found.

Here is the definition of the mentioned dag example:

As mentioned before the sensor operator is very useful if we want to wait for some event to occur in our workflow. But what about the case when we need tens or even hundreds of sensors in our airflow instance? It turns out that having a large number of regular sensors can cause the following issues:

To face the mentioned issues, a new version of sensor operator was introduced in Airflow 2.0: Smart Sensor.

What are Smart Sensors, and when should we use them?

The main idea of the Smart Sensor service is to stop assigning one process for each sensor task, because this approach is not efficient. Instead, centralized processes are used to execute those long-running tasks in batches.

To achieve that, the execution of the task is split into two steps:

The smart sensors were designed to drastically improve the efficiency of these long-running tasks, which can lead to large savings in the infrastructure costs. You should start using them if your dags contain tens or hundreds of sensors and cause significant underutilization of the resources. 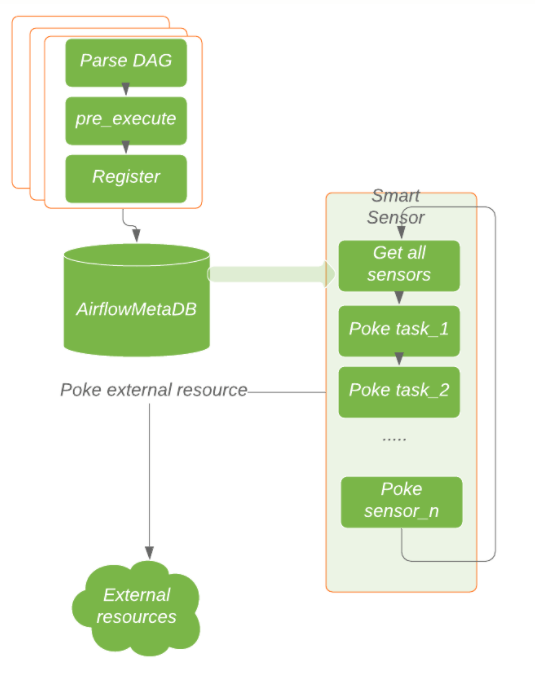 To configure the smart sensor service in Airflow, you first need to enable it in the configuration. Here is the example part of the airflow.cfg which enables the smart sensors.

Explanation of the configs:

The next step of the configuration is to upgrade the Airflow database to add the sensor_instance table, which is needed for smart sensors to work. To do that, just run the following command:

Those are the actual smart sensor workers, which pick up and execute the sensor tasks. For smart sensors to work, they need to be turned on manually.

Finally, we can set up our smart sensor. It’s a modified version of the regular sensor that was presented above

First create a new file: $AIRFLOW_HOME/plugins/smart_file_sensor.py which contains the definition of SmartFileSensor. It is a regular file sensor but with necessary additions that are needed for it to work as a smart sensor. File contents are presented below:

Note the poke_context_fields variable. It contains the set of arguments that are expected when creating the sensor.

Then in the sensor.py (example dag with regular sensor from above) add the following import:

Now the defined sensor tasks should be working as smart sensors.

Note that now when the DAG gets triggered the sensor tasks’ status is set as sensing  until the conditions defined in the sensors are met, whereas the tasks in smart_sensor_group_shard_xx  dags are in running state. 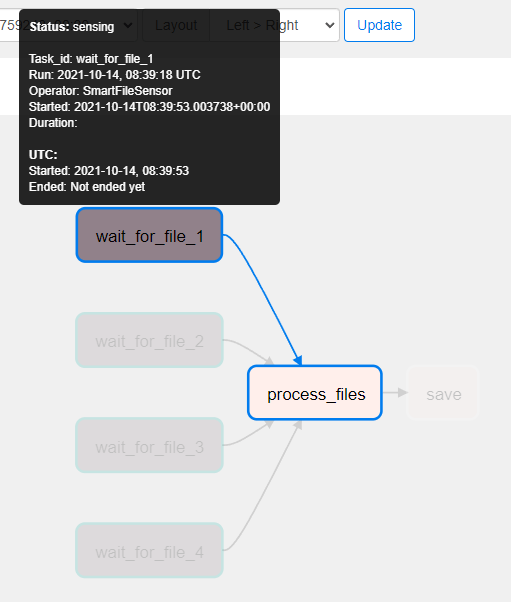 The smart sensor service is one of the major features introduced in Apache Airflow 2.0. It is used to improve the performance of the sensors by consolidating those smal,l light-weight tasks into a large single process. It should be used when a large number of sensor tasks are used on a single Airflow instance to improve the utilisation of computing resources.

When should you consider using Apache Airflow? Use Cases 29 April 2022

How to spin up to 1000 parallel Airflow 2.0 tasks in 5 minutes from nothing with the CeleryExecutor and Kubernetes 22 February 2022